Students in the physics elective course Gravitational Astrophysics (known colloquially as GASP) were selected to field test the “Laboratory for the Study of Exoplanets” developed by the Harvard-Smithsonian Center for Astrophysics.

I think it did help me learn more because there was such a real world feel to this activity. I had to really learn and understand what was going on because I couldn’t bluff my way through it. 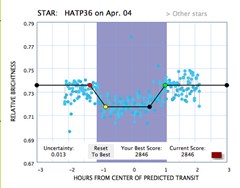 A MicroObservatory telescope based in Tucson, Arizona and dedicated to this project, was used to take images of a particular star’s brightness on the specific night requested by our class. A dip in the brightness vs. time graph signaled the transit of an orbiting planet blocking the light of the star (see sidebar for the actual data with best fit). The students used a series of five online, interactive labs to model transit curves corresponding to different scenarios and to work through authentic image-processing procedures. They then quantitatively analyzed their data to determine the radius and orbit size of the exoplanet.

USING REAL-LIFE DATA WHICH WAS TAKEN SPECIFICALLY FOR OUR CLASS DEFINITELY RAISED THIS LAB TO A HIGHER LEVEL.

I am pleased that my students had this chance to mimic some of the data analysis procedures used by professional astrophysicists to process “noisy” data and extract numerical values despite uncertainty in the measurements. The students were very excited about asking the telescope in Arizona to take images for THEM! It also gave them insight into some of the issues which can arise in observational astronomy (moonlight, clouds, light pollution etc.)

This set of online labs made for a technologically rich activity. Although I wrote worksheets to supplement the lab work, most of the time students were interacting with sophisticated computer software to answer questions and documenting them into their online journal. Each student had his or her own laptop but worked side by side with a partner, which allowed for discussion as needed. They used equations which we had used in the classroom to calculate the size of the exoplanet’s orbit and its radius. Johannes Kepler wrote his third law in the early 1600s and we have used it to analyze several types of orbit situations during this course. It was heartening to see my students apply it competently to this new scenario and for them to realize that present day professional astronomers use this equation too.

And finally, this project fostered a collaborative, team-based approach to the search for their exoplanet, which I welcomed but had not anticipated beforehand. Working on an “outside” project, where the class transit graph would be displayed on the Center of Astrophysics website for all to see, encouraged the students to help each other with any problems that arose so that their cumulative graph would be the most accurate possible. At the end, there was intellectual pride in their accomplishments that was palpable. On this screen is a photo of the class with their transit graph (sidebar) and another with two members of the class modeling a planetary transit (above).

Personally, I found this project educationally stimulating, and I also had a lot of fun working through the series of labs on my own. I plan to incorporate this activity into my curriculum for GASP next year.

I feel that the data analysis was very useful. Analyzing and describing the graphs will be an important skill to carry over into the future. Interpreting data accurately and correctly is a very useful skill……. Real world science is not perfect! Errors occur and data can be skewed such as the relative brightness levels. Results must be interpreted from imperfect data.

I think it did help me learn more because there was such a real world feel to this activity. I had to really learn and understand what was going on because I couldn’t bluff my way through it.

I learned that real world science has a lot of steps and must be done very carefully in order to get a correct result.

I learned that “real world” science isn’t always about difficult, complicated things; sometimes it’s about visual and analytical analysis of concepts…….. I found this project very intellectually exciting because I felt that the discovery of an exoplanet is very interesting, and to have it occur in a format which was so straightforward made the situation even better.

I thought it was very cool to act like a true scientist and review real stars.

It had a real world connection. I felt like a researcher and astrophysicist because we were analyzing and predicting images based on the REAL sky in Tuscon, Arizona.