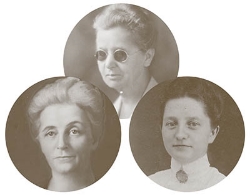 Maret School is over 100 years old. Founded in 1911 by Marthe Maret and her sisters as a French primary school, the School is widely considered to be one of the very best coeducational, K-12 independent schools in the Washington, DC area. Well into our second century, Maret continues to nurture an inclusive and robust learning environment where our history not only sustains us but also transforms us.

At the turn of the twentieth century, three French sisters, Marthe, Louise, and Jeanne Maret, left their home in Geneva, Switzerland to teach. Louise taught in Russia, Jeanne in the Philippines, and Marthe (who became blind at age 18), in Washington, DC.

By 1911, Louise and Jeanne had joined Marthe in the nation's capital, inspired to introduce an international focus to the city’s education. That year, they founded Maret French School – later named Maret School. In 1923, the Maret sisters moved the School to 2118 Kalorama Road with an enrollment of 62 culturally diverse students.

By 1950, Principal Margaret Williams was on board; she led Maret for the next 18 years, building upon the School’s solid foundation. Under Mrs. Williams’ direction, Maret continued to flourish, earning praise for its high standards in linguistics and a renowned reputation for embracing international cultures.

In 1952, burgeoning enrollment compelled the School’s Board of Trustees to purchase a larger campus on the grounds of the historic DC property known as “Woodley” at 3000 Cathedral Avenue, NW. With the move, a French Baccalaureate option was incorporated into the curriculum. By 1966, enrollment had reached 375 students.

The mid 70s marked the beginning of what many would call “the Sturtevant years” -- the tenure of Peter A. Sturtevant, Sr., who led Maret for the next two decades. Under his leadership, a new level of intellectual creativity was woven into the fabric of the School. Mr. Sturtevant instituted cross-curriculum teaching well before such instruction was nationally embraced. He advanced the notion that high achievement and risk-taking were symbiotic, a belief that is now integral to Maret’s mission and philosophy.

Through his guidance, Maret evolved as an environment in which all ideas could be examined openly. To accommodate an ever-growing enrollment (508 students by 1989) the campus was enhanced with additional facilities for athletics, arts, and academics. Maret’s athletics program was strengthened and enlarged. Maret’s became a competing force among league schools.

In 1994, Mr. Sturtevant passed the baton to present Head of School Marjo Talbott. Over the years, Maret had developed a rich tradition as an innovator in college preparatory education. Ms. Talbott's task was to build upon that legacy while preparing Maret for the new millennium.

During Ms. Talbott's tenure, Maret has made significant strides. Under her leadership, an overarching two-phased Master Facilities Plan was implemented; the $30 million program was completed in 2005 with the dedication of Talbott Hall. Ms. Talbott also oversaw the creation and implementation of two 10-year strategic plans and spearheaded the Second Century Campaign to expand Maret's endowment during Maret’s Centennial year. Her commitment to Maret's legacy – a school that embraces different cultures, interests, perspectives, and talents – is evident in the composition of the student body. Enrollment now stands at 635 students – 40% of our students identify as students of color; parents hail from more than 45 nations; and 24% of our students receive financial aid, ensuring economic diversity.

Ms. Talbott has made community engagement a cornerstone of Maret, instituting the Service Learning program and a commitment to a wide-range of meaningful partnerships throughout the DC metro area. True to the Maret sisters’ motto of continually “moving forward,” the Case Institute for Curricular Innovation & Excellence, MSON, and the Fateh Library and Center for Inquiry foster creativity, best educational practices, and the effective teaching of essential skills.

Woodley, the central building on campus, is a Federal style house built in 1801, the year Thomas Jefferson assumed the Presidency. In those days, the land was cleared between the Woodley site and the Potomac River beyond which meant that Woodley residents had a panoramic view of the incipient capital in the lowlands below.

For a century and a half Woodley would house a series of prominent Americans including at least two Presidents, two Secretaries of War, a Secretary of the Treasury, a Secretary of State, a Senator, a Judge, an admiral, and General George Patton, "Old Blood and Guts himself." In 1950 the house and 7.5 adjoining acres were purchased by Maret School.

Since 1994, the Woodley Society, comprising students, faculty, graduates, parents, and friends, carries on primary research at a number of archives and libraries in the Washington area and beyond. The Society has hosted a number of Woodley-related receptions, most notably the bicentennial celebration in 2003.

Woodley is registered with the Historic House Museum Consortium of Washington, DC.